Want to know about news & events?

Massachusetts Must Read, YA Nonfiction

“The true story of a young enslaved woman who escapes the family of George Washington. ‘Ona Judge, Ona Judge / Why you run away / Ona Judge?’ So begins this inquiry into her quest for freedom; the question is repeated throughout the narrative. ‘You had fine dresses [and] soft shoes’ and other material benefits most enslaved people lacked. Ona is passed around the Washington family, first a playmate for the children, then a personal servant and seamstress for Martha Washington, never working in the fields. But when an aging Martha gives Ona to her granddaughter Eliza, ‘now a mean and sassy woman,’ Ona walks out into the Philadelphia night. Here, the tenor of the text changes—’Didn’t you know you broke the law?’—and the illustrations become dark as she makes her way around corners and hides in a basement. A framed picture—a departure from the full-bleed pages and spreads that depicts the current action—gives a glimpse of her future family life: ‘You dreamed a dream / You would make true.’ As she reaches a boat, and freedom, day breaks and readers see the first hint of Ona’s smile. ‘Then run, Ona Judge, run.’ With a distinctive, haunting voice, powerful images, and thought-provoking story structure, this unique look at a remarkable young woman’s life choices and decisions offers an utterly necessary but seldom highlighted perspective on the contradictions within our society’s foundations. A powerful antidote to whitewashed cultural mythology.”
– Kirkus Reviews, starred review ★

“Safety and freedom are the considerations Ona Judge must weigh in this historical picture book based on the life of a woman enslaved by Martha Washington. In the scenes of Judge’s early life, she is always shown marginalized, frowning off to the side of her illustrious owners. ‘Why you run, Ona Judge?’ is the narrator’s refrain, which initially is supported by the idea that the young, Black woman’s life was relatively privileged: she didn’t work in the fields, was well fed and clothed, and saw history being made in the president’s house. But Shepard quickly exposes the lie of that argument, showing that Judge had no choice in whether she stayed with her mother or even was given to someone else, and the reasons to run away, further emphasized by Mallet’s finely detailed illustrations, will be self-evident to young readers. An author’s note, time line, bibliography, and list of places to visit add important ways to help children gain a more nuanced view of American history. A fine addition to all collections.”
– Karen Cruze, Booklist

REVIEWS FOR NOW OR NEVER!

“Two black Civil War soldiers and writers offer unique perspectives about how they fought on and off the battlefield… both showing a different side of the war to blacks and abolitionists. Author Shepard does a great job using the dispatches from these men to form the basis for this narrative. The most impressive contribution is how the individual voices of (the soldiers) are in the forefront with their similarities and distinctions. This is a powerful use of primary resources, one that illuminates the lives of its subjects but never gets in the way of their remarkable stories. Rich backmatter provides useful information. Absolutely stellar.”
– Kirkus Reviews, starred review ★

“Written from the points of view of…the first African American war correspondents—fascinating, often brutal details from their experiences as soldiers in the 54th Infantry make up the backbone of this meticulously researched and highly readable history. This book will greatly enhance Civil War studies, leading to a deeper understanding of the African American plight throughout history and the racial prejudice that continues to this day. Teachers can also use this text to show how primary documents are critical to unbiased historical accounts. Documents and photographs add much interest and authenticity to the text.”
– School Library Connection, starred review ★

“The author will captivate readers with masterfully built suspense…The context of the war and the political climate of the country are interjected along with the complexity of sentiments about African Americans…The inclusion of a timeline, maps, drawings, and photographs…further enriches the narrative…this is an excellent addition to the history.”
– School Library Journal

“This well-researched volume is recommended for students who want to dig a little deeper into the history of the 54th Massachusetts Infantry Regiment.”
– Booklist

“This timely and important book…gives readers a unique and honest look at the Civil War, different from what is traditionally taught in classrooms (and) packs an impressive amount of detailed information, as well as emotional punch….perfect for both junior high and senior high school research, as well as for any reader interested in African American history and Civil War history. This is a highly recommended purchase for libraries serving young adults.”
-VOYA

In this week’s episode, we interview Ray Anthony Shepard, author of Now or Never!: 54th Massachusetts Infantry’s Fight to End Slavery. This interview was recorded during BIO’s May 2018 annual conference in New York City. Listen now…

On Saturday, July 18, 1863, the 54thMassachusetts Regiment attacked Fort Wagner, a Confederate fortification defending Charleston Harbor. The assault began at about 7:45 PM. Within two hours, of the 624 men who made the attack, 54 were killed, 149 were wounded, 76 taken prisoner—half the regiment killed, wounded or captured.

But Fort Wagner was not the beginning of the story of the 54th Massachusetts Infantry nor its end. The complete story of both the regiment and the men who formed it is told by Ray Anthony Shepard in his book Now or Never: 54th Massachusetts Infantry’s War to End Slavery, written for middle-readers, but, as one reviewer wrote, “an enlightening read for adults as well.” Ray Shepard has been both a teacher and an editor; this is his first book of creative non-fiction. Listen now… 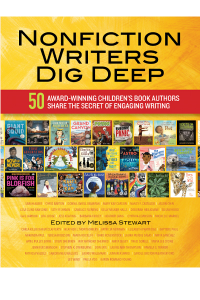 Some of today’s most celebrated nonfiction writers for children share how their writing processes reflect their passions, personalities, beliefs, and experiences in the world. Editor Melissa Stewart offers a wide range of tips, tools, teaching strategies, and activity ideas to help students learn to craft rich, unique prose.

Ray is one of the 50 authors featured in Nonfiction Writers Dig Deep, published by the National Council of English Teachers (NCTE).

Being a biographer for young readers who writes about Black lives in America is a conundrum that goes beyond a writer’s normal anxieties. Let me count the ways. Read more…

A 70-year-old walks into a barn. No, it’s not the beginning of a joke. There’s no rabbi or preacher to deliver a punchline that knocks you to the floor in a fit of guffaws. There is, however, a moral: You’re never too old to write.

After 40 years of the classroom and educational publishing, I wanted an encore career of writing biographies for young readers. Three Highlights Foundation workshops later, two of my books are winding their way into bookstores and libraries. There’s a moral to this story as well: I’m not an overnight success, 70-some odd years in the making. Instead, I’ve been blessed by stubbornness, good luck, and the kindness of strangers. Read more…

Ray Anthony Shepard’s first book, Now or Never! 54th Massachusetts Infantry’s War to End Slavery, was published in October 2017. Shepard describes the book as “the story of two black Civil War soldiers whose battlefield dispatches documented the regiment’s battle against Northern white racial arrogance as they fought the Confederacy’s attempt to establish an independent slave empire. George E. Stephens and James Henry Gooding answered Frederick Douglass’s call: ‘through Massachusetts we can get our hands on treason and slavery.’ Read more…

Educational publisher Ray A. Shepard was born on June 26, 1940 in Sedalia, Missouri to Cornelius “Boots” Shepard and Loretha Mae Jackson Shepard. He graduated from Lincoln High School in Lincoln, Nebraska and served in the United States Army during “The Cold War,” based in Germany at the time of the construction of the Berlin Wall and the Cuban Missile Crises. After he completed his tour of duty, Shepard earned his B.S. degree from the University of Nebraska, Lincoln in Lincoln, Nebraska in 1967. He received a Martin Luther King, Jr. Fellowship from the Woodrow Wilson Foundation to attend Harvard University and earned his M.A. degree in teaching from Harvard Graduate School of Education in 1971. Read more…